Instrumental Music to be discussed by Education Executive

The future shape of West Lothian Council's Instrumental Music Service will be discussed at a meeting of the Education Executive on 17 April 2018.

At a special meeting of West Lothian Council on Tuesday 3 April, a motion to consider charging for instrumental music lessons and maintain all instrument disciplines was not considered.

The motion was ruled out under the council's Standing Orders, as the future shape of Instrumental Music was discussed at the Education Policy and Development Scrutiny Panel (PDSP) on 13 March, and is set to go to the Education Executive on 17 April for a decision, so the matter is already under consideration.

A £0.5million per year budget for instrumental music was agreed when the council's revenue budget was set in February.

A West Lothian Council spokesperson said: "A decision on the future shape of our Instrumental Music Service will be made by the Education Executive on 17 April, which will include the points raised during discussions at the PDSP.

"West Lothian Council is looking to introduce a revised, sustainable model of instrumental music provision in West Lothian, maintaining a substantial level of tuition for a significant number of young people.

"We are one of very few local authorities in Scotland who still offer free instrumental music tuition, with the majority of councils now charging for lessons. We plan to spend around £0.5 million per year on instrumental music, which is not a statutory service therefore does not have to be provided by the council.

"The council is facing estimated budget savings of £65million over the next five years, so it is essential we make savings across the council to allow us to balance our budget. The money we receive from the Scottish Government is significantly less than what we need to cover rising costs for our growing young and older populations in particular."

Back to April 2018
Education 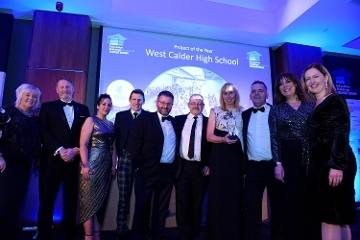 The multi-award winning West Calder High School was given the much coveted Project of the Year title at the Education Buildings Scotland Awards recently.