The flagship event took place at Linlithgow Burgh Halls, with over 90 guests from community sports clubs, partner organisations and schools attending to support the worthy finalists, who were all nominated by the public.

Depute Leader of the Council Kirsteen Sullivan officially welcomed everyone to the event, which was MC'd by Michael Stewart, Principal Teacher for Scottish Attainment Challenge in West Lothian.

The guest speaker was Craig McLean, an international swimmer who attended Deans Community High School and is a former Excellence in School Sport Programme (ESSP) pupil.  Craig spoke about his path to elite performance, the problems he's encountered along the way, and achieving his goal of representing Scotland at the Gold Coast Commonwealth Games and Great Britain at the recent European Championships.

Leader of the Council, Lawrence Fitzpatrick, said: "Celebrating Sport 2018 provides us with the opportunity to honour the dedication and commitment of our local athletes, clubs, coaches and volunteers in West Lothian.

"Congratulations to everyone who was nominated and to all the finalists who have shown such a high level of talent and dedication to sport."

Archer James Tocher from Inveralmond Community High School in Livingston was on target to take home the prestigious Sports Person of the Year award, with Livingston Athletic Club's Sandra Hardacre clinching the Coach of the Year trophy.

Other winners included: St Kentigern's Academy pupil Chelsea Bishop, who was presented with the Contribution to School Sport award; cricketer Jim Wilson in the Local Service to Sport category; and Livingston Athletics Club, who were crowned Club of the Year.

A fantastic 12 Gold School Sport awards were also presented in the night, in recognition of a school's outstanding achievement of putting quality physical education and school sport at the heart of their planning, practice and ethos. A total of 69 West Lothian schools now hold a Bronze, Silver or Gold School Sport Award, one of highest participation rates for any local authority, and equates to over 10% of all awards across Scotland.

Provost Tom Kerr closed the event with a vote of thanks, acknowledging the hundreds of volunteers in clubs and organisations who provide all levels of sport across West Lothian week in week out. He also thanked council staff in both the Active Schools & Community Sport team and Linlithgow Burgh Halls for delivering such a successful event.

Back to December 2018
Health & fitness

West Lothian Council is investing £2.4 million to improve access to council facilities for people with disabilities 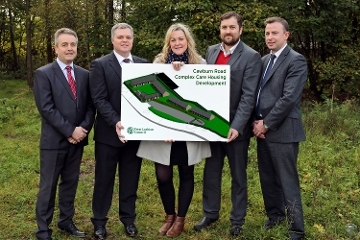 New figures show that West Lothian Council has dramatically increased the proportion of Scottish meat served in its school meals since joining the Food for Life Scotland scheme in November 2018.