A jobs fair at the Regal Theatre in Bathgate saw 376 local residents attend in order to gain employability advice from a wide variety of organisations. 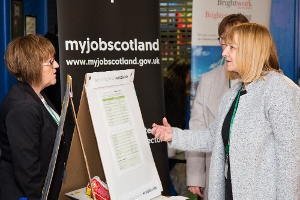 The jobs fair was organised by PACE (Partnership Action for Continuing Employment) which includes West Lothian Council, Skills Development Scotland and Job Centre Plus in order to offer expert support and information.

The event took place following the closure of Kaiam in Livingston but was open for all to attend particularly if they were facing redundancy from their place of work.

31 businesses with current vacancies and seven support agencies had stalls at the fair with 187 of people who were in attendance stating that they were affected by redundancy, 137 of which were former Kaiam employees.

West Lothian Council employability services will continue to provide support to those that attended the jobs fair to secure employment.

West Lothian's Executive councillor for development and transport Cathy Muldoon said: "West Lothian Council are delighted to support the Jobs Fair, which has been organised through PACE.

"The fair aims to help Kaiam workers and anyone else in West Lothian looking for employment to find a new job or opportunity.

"We had a fantastic turnout from local employers at the jobs fair, and we would like to thank them all for coming along today.

"There was also a huge response from the public, who came along in their hundreds, and I hope this event has helped as many people as possible to find a new opportunity for themselves."