West Lothian Council recently held an event at Howden Park Centre to commemorate the suffrage movement and 100 years since some women first received the right to vote. 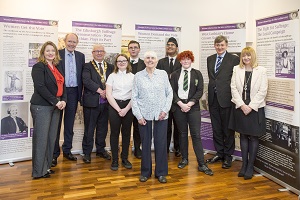 The first women's suffrage petition was presented to Parliament in 1832, but it wasn't until over 80 years later in 1918 that some women were granted the vote, making 2018 the 100 year anniversary of this important milestone in history. The celebration also marked the 100 years which have passed since the first woman served as a member of parliament in the United Kingdom back in 1919.

The event included a performance about the fight for suffrage by St Kentigern's Academy and a talk from former MP and Chair of the Remember Mary Barbour campaign, Maria Fyfe who spoke to the audience about the progress and achievements of women in politics throughout the last century.

She said: "I was delighted to speak at today's event and highlight the achievements of women in politics over the past 100 years. There has been great progress but it is our responsibility to ensure that we achieve equality in politics and see a 50-50 split in representation between women and men.

"I hope that all the young people in the audience will be inspired by the stories of women such as Mary Barbour and can see that a life in politics still has the ability to promote and campaign for vital causes."

Depute council leader Kirsteen Sullivan opened the event. She said: "The fight for women's suffrage was not an easy one, and it was down to the tireless campaigning, lecturing and demonstrating, writing letters to MPs and producing political leaflets, that suffragettes and suffragists managed to further their cause for votes for women.

I was delighted to see so many people at today's event especially the students from across all secondary schools in West Lothian. The performance from St Kentigern's Academy pupils really allowed us to reflect on a key moment in history and offered real inspiration to think about how we can positively influence society in the years ahead and ensure equality."

An exhibition called 'Women and Democracy: the West Lothian story' was featured at the event and will soon be appearing at Partnership Centres across West Lothian.

A special booklet on the local women's suffrage movement was commissioned to mark the anniversary.