West Lothian Council has had the safer surface and rope net at Almondvale Play Park, Livingston repaired. The park was damaged last year after vandals set it on fire. 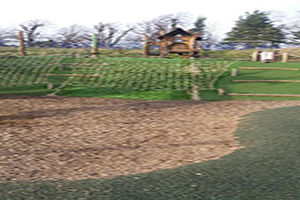 The stainless steel tunnel slide has been removed and repaired by a local blacksmith. That will be refitted later this week.

The flagship park, which is located on the banks of the River Almond in the heart of Livingston, was by the council in September 2017 at a cost of £120,000.

The total costs to repair the park after this attack was nearly £24,000 and this was the second time the facility has been targeted by mindless vandals. In total, the council has spent nearly £34,000 on vandalism repairs since the park opened.

Executive councillor for the environment Tom Conn said: "It's a disgrace that the council has to spend £34,000 in less than two years to repair a kids' park.   It's such a thoughtless thing to do and it's very sad to think that people are willing to deliberately damage a children's play park.

"The reality is that we could have built a brand new toddler park elsewhere in West Lothian with the money that we've had to spend on repairing this park following two incidents of vandalism.

"When our parks are vandalised we need to repair them, which ultimately takes limited funding out of our budget which could have been used on improving more parks.  Local people are rightly angry when they see their local parks targeted by vandals.

A historic school site and community hub in Mid Calder is set to become home to a café and cheesecake shop.