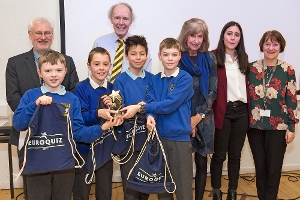 The Linlithgow Primary team of Tom Diamond, Isaac Watson, Szymon Sroka and Lewis Allcroft were the winners on the day finishing ahead of runners up St Nicholas Primary, Broxburn.

To prepare for the event pupils formed teams and used resources to learn about a range of topics, including citizenship, current events, geography, world history, culture and languages.

Through participating in Euroquiz, pupils deepen their knowledge of international affairs, but also have the opportunity to develop team building, confidence, language and communication skills.

18 schools took part in the West Lothian heat, which took place on Friday 1 March at Howden Park Centre in Livingston. Pupils, all from primary six classes, competed in teams of four with Linlithgow Primary School now going on to represent West Lothian at the national final in May 2019 at the Scottish Parliament in Edinburgh.

He said: "It was a challenging quiz so well done to all the teams who participated.  All the pupils who took part displayed great knowledge. Congratulations to the team from Linlithgow Primary School. I wish them the best of luck for the Scottish final in May."