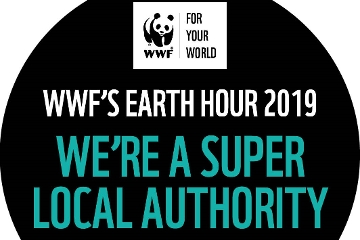 This year the annual event which aims to raise awareness of climate change is marking its 12th anniversary.  West Lothian Council has been awarded a Super Local Authority Badge for its commitment to sharing the message to take action against climate change.

West Lothian Council's executive councillor for the environment, Tom Conn said: "We're delighted to support Earth Hour as it is a great way to raise awareness about the impact of climate change and hopefully as many people will take part as possible.  We hope that householders will be able to use Earth Hour as an opportunity to think about energy use and the different ways that it can impact on the environment through climate change.  Switching off and reducing energy consumption can help the environment and it could also save householders and businesses money too."

Sam Gardner, acting director of WWF Scotland, said: "We are very pleased that West Lothian is again taking part in WWF's Earth Hour. It's an opportunity for us all to demonstrate in a simple way that we care about our planet and the impact climate change is having on people and nature across the world. Nature needs support right now. We must act to reverse the damage and restore the environment. We have the solutions, we just need our voices to be heard. That's why Earth Hour is so vital - it gives a powerful voice to people everywhere who want to put the world on the path to recovery."