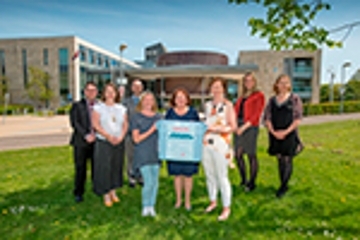 West Lothian Women's Aid (WLWA) have been given £3,000 and the Dignity Boxes charity received £1,000 from money generated through the sale of scrap metal.

Many people given a Community Payback Order (CPO) by the courts take part in unpaid work as part of their community sentence. One of the projects they undertake involves repairing bikes which are then passed onto local charities, and any bikes which cannot be repaired are then sent to scrap to redeem the value of the metal.

"Both West Lothian Women's Aid and Dignity Boxes carry out important work to help the local residents and deserve this additional support."

"As well as local charities benefiting from free refurbished bikes, the money generated from scrap metal is now helping local good causes. Those with a CPO also helped choose the charities to benefit from the donation."

WLWA Manager Ilena Brown said: "West Lothian Women's Aid are delighted to benefit from this valuable donation at this time.

"The funds will go towards the provision of group support and counselling to enable women to recover from their experiences of Domestic Abuse."

Dignity Boxes founder Isabel Dosser added: "Dignity Boxes is grateful for this kind donation from the CPO service and applaud the work that they do in West Lothian.

"This donation will help support the charity in a number of ways, including printing and marketing of their new identity in posters and other formats as well as buy boxes for storage and donations.

"Products will also be purchased if there is found to be an imbalance of anything in the items donated. We are delighted as a new charity to be supported and recognized in this way."