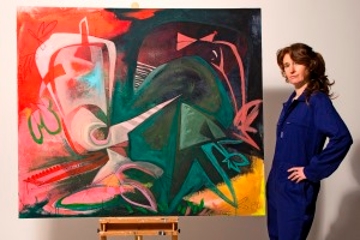 Coming Alive is a unique new body of work by Edinburgh-based artist Alice Boyle, who previously co-directed the internationally acclaimed Graffiti Project at Kelburn Castle near Largs, where she grew up.

For many years, Alice has sketched following her daily meditation routine, bringing to life odd and often distorted creatures from what psychoanalyst Carl Jung called the 'collective unconscious'.

Jung claimed that while the collective unconscious is common to all human beings, it is genetically inherited and not shaped by personal experience.  Boyle believes this is where all the world's mythologies come from, and we delve into it through sleep, meditation, prayer, ritual or creativity.

Alice works with layers of plaster, with the process giving her artworks a sense of the primitive, such as pictograms or petroglyphs in ancient caves.

The striking exhibition is already receiving rave reviews from the press, as well as members of the public who have visited it.

Alice Boyle said: "I am inspired by the power of dreams, mythology and the collective unconscious.  I use textures, vivid colours, shapes, symbols and layering techniques, aiming to stimulate the senses while exploring the eternal and intrinsic search for individual wholeness through the process of art and creativity."

To see the free exhibition, visit the Gallery at Linlithgow Burgh Halls, The Cross, Linithgow, EH49 7AH between 9am and 5pm, Monday to Saturday, and 11am to 5pm on Sundays until Sunday 13 October.