Drumming up success for Rachel

A talented West Lothian musician has been recognised for becoming the first female to win a prestigious pipe band drumming competition. 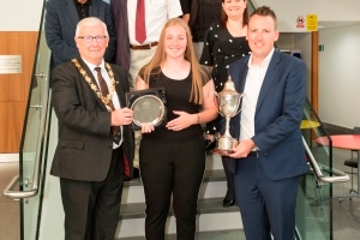 Livingston's Rachel Thom (18) is understood to be the first female to lift the sought-after Under 18 World Solo Champion Pipe Band Drummer prize.

The former Deans Community High School pupil was honoured for her achievements by West Lothian Council at a civic recognition event recently.

Rachel was a key member of West Lothian Schools Pipe Band during her time at Deans, taking the role of leading drummer for a number of years.

Provost Tom Kerr said: "Many congratulations to Rachel on her amazing achievement.

"It takes hard work, dedication and talent to become the best in your field, and Rachel has earned her place in the history books by becoming the first female to win the Under 18 World Solo Champion Pipe Band Drummer prize.

"Everyone in West Lothian can be rightly proud of her, especially her family, friends, tutors from the West Lothian Schools pipe band Gordon Bruce, Greig Canning and David Ross and teachers from Deans High, including music teacher Sarah Duncan."

Rachel is continuing to hone her skills with Grade 1 Glasgow Police Pipe Band, and is currently completing a 12 month internship with the Scottish Schools Pipes & Drums Trust at Preston Lodge High School in East Lothian.