A number of events are being held throughout West Lothian to mark Challenge Poverty Week. 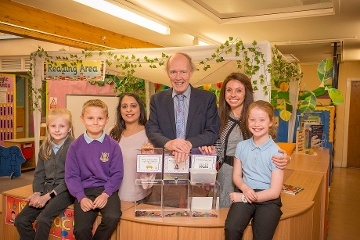 The Week is a national campaign designed to show that poverty exists in Scotland and affects us all, that people can work to end it, that it restricts people's ability to take part in society and that it can be solved by boosting incomes and reducing costs of living.  Council Leader Lawrence Fitzpatrick visited Croftmalloch Primary School in Whitburn to hear about their work being undertaken to tackle poverty.

Acting Head teacher Laura Baillie and P5 pupils spoke about some of the work taking place to tackle poverty and reduce the cost of the school day for families on a daily basis. This includes: work to reduce the cost of uniforms , breakfast clubs, subsidised school trips and a food and welly boot bank.  Leader of West Lothian Council Lawrence Fitzpatrick said: "Too many people are trapped in the grips of poverty and don't have the means to escape. Challenge Poverty Week gives us an opportunity to highlight that there is help and support available and the chance to talk about what we can all do to address this growing issue. Hopefully our events will mean that individuals who are suffering the effects of poverty can get the appropriate support and advice to help unlock their full potential. It was lovely to meet the pupils and staff at Croftmalloch Primary and hear about the wonderful work that they undertake to help people."

Poverty is caused by a combination of factors. As the cost of living continues to rise and wages remain low, families of low income are struggling to afford the basic necessities. This has a particular impact on children. The report highlights that poverty is fundamentally about a lack of disposable income. The average level of child poverty in West Lothian is 22% which is comparable to the Sottish level. This means that 8,551 children in West Lothian live in relative poverty after housing costs are taken into account. The national Child Poverty Act set out that by 2023 less than 18% of children should be living in relative poverty. Whilst the West Lothian average is 22% this figure is higher in some areas of West Lothian (i.e. Whitburn & Blackburn is 32%).  West Lothian Council is developing a Local Action Report to tackle child poverty.

Councillor Fitzpatrick said: "The scale of the challenge to reduce poverty at a local level should not be underestimated.  The fact is many of the most effective long term interventions for alleviating child poverty sit with national government, most notably in Westminster. However we can't focus on what we can't control, the council is focussing on what we can do to improve the life chances for young people in West Lothian and all agencies must work together to make progress. Ultimately we are investing in work that will hopefully reduce poverty in West Lothian, including child poverty.  "Our work in this area demonstrates the commitment to work across the Community Planning Partnership to mitigate the effects of poverty and our plan has a strong focus on interventions and approaches that will reduce child poverty in West Lothian."