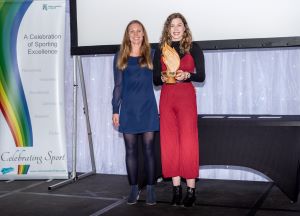 The flagship sporting event of West Lothian Council took place in the Burgh Halls, Linlithgow, recently, in front of an audience of around 100 invited guests from community sports clubs, partner organisations and local schools.

All the finalists were nominated by the public for their significant contribution to sport in West Lothian.

Curler Annabel Skuse from Linlithgow was awarded the Sports Person of the Year trophy, with Coach of the year accolade given to Swim IT's Fiona Donald.

Executive councillor for culture and leisure Dave King, who officially opened the event, said: "Celebrating Sport 2019 provides us with the opportunity to honour the dedication and commitment of our local athletes, clubs, coaches and volunteers in West Lothian.

"Congratulations to everyone who was nominated and to all the finalists who have shown such a high level of talent and dedication to sport."

Michael Stewart, Principal Teacher for Scottish Attainment Challenge in West Lothian, was MC on the night and kept the proceedings moving along smoothly in his own inimitable way.

Guest speaker was former professional triathlete Catriona Morrison MBE, who used to live in West Lothian and was an Active Schools Coordinator with West Lothian Council. Catriona, who is now Business Development Manager at the Spartans Community Football Academy social enterprise spoke powerfully about using sport and physical activity to intentionally bring about positive change for individuals and communities.

Other awards presented on the night were six Gold School Sport awards.  This award is in recognition of a school's outstanding achievement of putting quality physical education and school sport at the heart of their planning, practice and ethos.  Andrew Baptie from sportscotland presented Gold awards to Blackridge PS, Eastertoun PS, Our Lady of Lourdes RC Primary, St Joseph's RC Primary (Linlithgow), Stoneyburn PS and Windyknowe PS.

Jim Cameron, Head of Education (Learning, Policy and Resources), closed the event with a vote of thanks, acknowledging the hundreds of volunteers in clubs and organisations who provide all levels of sport across West Lothian week in week out.  He also thanked Active Schools & Community Sport and the Burgh Halls staff for delivering such a successful event