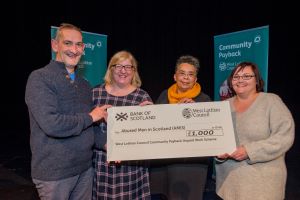 The council's Unpaid Work team have donated £1,000 to the Abused Men in Scotland (AMIS) charity, which was set up in 2010 to support men who were subject to domestic abuse.

Many people given a Community Payback Order (CPO) by the courts take part in unpaid work as part of their community sentence. One of the projects they undertake involves repairing bikes which are then passed onto local charities, and any bikes which cannot be repaired are then sent to scrap to redeem the value of the metal, which generates money for local good causes.

"As well as local charities benefiting from free refurbished bikes, the money generated from scrap metal is now helping local good causes with those with a CPO helping choose the charities to benefit."

AMIS Service Manager Iris Quar, who accepted the cheque on behalf of her organisation, said: "AMIS is delighted to receive such a generous donation from a scheme which, in its self, delivers such positive benefits to the local community in West Lothian.

"This will help us to maintain our support services and bring hope to domestic abuse experienced men in Scotland. Thank you from all at AMIS and on behalf of the men it will help."

Previous donations from the scheme include charities such as West Lothian Women's Aid (WLWA), who support local woman and children affected by domestic abuse, and Dignity Boxes, who provided toiletries for those unable to buy their own.

Back to February 2020
Health & fitness

Join us in caring for West Lothian

West Lothian social care workers are appealing for more people to join them in making a difference to the lives of vulnerable members of our community.

The places where West Lothian residents can go for Asymptomatic Testing are on the move. 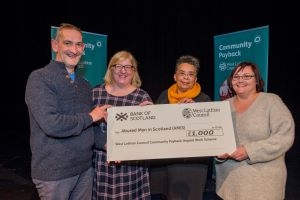