A big-hearted West Lothian Council waste collection crew have been crowned top of the league for spreading Christmas cheer. 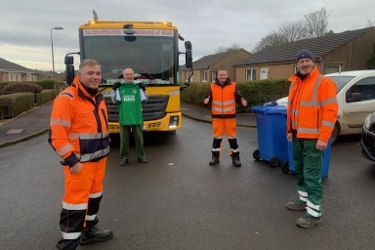 The crew of Rob, Stuart and Declan enjoy a great rapport with the residents on their beats, and often hand out gifts at Christmas to the children they see and wave to during the year.

They also enjoy regular football banter with massive Hibs fan Bill from East Calder. When Bill told the crew that he has no family and was going to spending Christmas alone, they knew they had to do something to brighten his day.

So the crew bought Bill a Hibs football top, and arranged for it to be signed by the Hibs team through club captain David Gray, who lives in West Lothian.

Waste operative Rob Callander said: "Bill's a great guy and always comes out for a quick chat and some football banter with us when we are emptying his bins.

"When he said he was spending Christmas alone, we wanted to do something special for him. He's Hibs daft, so we all chipped in to get him the football top".

"Huge thanks for Hayley and David Gray for arranging to get the top signed by the Hibs team, Bill seemed really delighted to get it and hopefully it's helped make sure he has the great Christmas he deserves."

Executive councillor for the environment Tom Conn said: "It's fantastic to see Rob and his crew go above and beyond to bring some festive cheer to a local resident like Bill this year.

"We have received a lot of positive messages regarding our dedicated waste crews in the last few weeks, who have worked tirelessly throughout the pandemic to ensure collection were not disrupted.

"The thanks they have received from local residents recently shows just how much their efforts have been appreciated during a very challenging year."

Back to December 2020
Environment & outdoors

Watch out for fires in warm weather

West Lothian residents are being asked to be extra vigilant with fire during the current spell of warm weather.

The programme to deliver over 83,000 green bins to homes across West Lothian is taking slightly longer than anticipated.

Blue and brown bins scheduled for collection on the Platinum Jubilee special holiday, Friday 3 June, have been suspended.