The majority of West Lothian's primary carriageways are now fully accessible, thanks to the fantastic efforts of the Roads team. 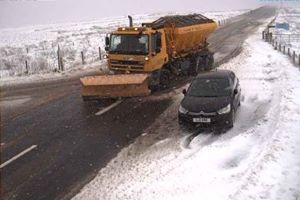 These routes have been continually ploughed and gritted since 5pm last night, and will keep being treated while snow continues to fall.

Limited progress was made in the secondary level 1 carriageways today, and more resources will be allocated to them tomorrow as conditions allow.

The forecast is predicting frequent snow showers between now and tomorrow morning, which is likely to result in significant accumulations. The primary carriageways will be ploughed and gritted this evening and overnight as required. Resources for footways and schools are planned again from 5am tomorrow morning.

West Lothian's extensive network of 2,500 public grit bins were replenished in advance of this weather event, but we recognise that many of these will need replenished once more.
Every available resource is now engaged in delivering the core Winter Service, but arrangements will be made to replenish the grit bins again once the current weather event eases and resources become available.

The 15 strategic salt piles will continue to be topped up for the remainder of this winter.

Although the primary carriageways are now accessible, we recognise that conditions on many of the secondary and residential routes remain difficult. Anyone making essential travel is advised to take extra care, until the weather eases enough to allow us to shift resources from the primary roads onto other routes.

West Lothian's gritter fleet have been out continuously gritting and ploughing the primary carriageways since 5pm last night, and will continue to do so until satisfactory clearance has taken place.

All West Lothian schools are open, with school transport running as normal except a few delays.

In conditions like this, it is not possible for local authorities to keep the primary carriageways clear of snow at all times.

Rock salt lowers the freezing point of moisture on the road surface, stopping ice from forming and causing existing ice or snow to melt. However, for the salt to work most effectively it requires other vehicles to crush it and spread it across the road.

If moderate to heavy snow continues after ploughing / gritting has taken place, then it will still settle on treated surfaces, particularly if traffic volumes are relatively low such as during the night or early morning.

This is why it may appear that a road has not been treated, even though it has been ploughed and gritted in both directions.

The combined length of our primary carriageways exceeds 500km, although the actual travelling distance is significantly longer, meaning there are several hours before the same section of road can be reached again.

Footway and school gritting has been underway since 5am and will continue for the rest of the day. Our remaining resources are being used to plough and grit the secondary level 1 carriageways but it will be difficult to reach residential carriageways whilst action is required on the higher priority routes Hand gritting crews have also been deployed from 8am to supplement the footpath gritters and attend to the smaller villages that have no dedicated vehicle.

The forecast is for frequent snow showers to feed in from the North Sea today, with a brisk and bitterly cold north-easterly wind. There will be further widespread snow as much as 20-25cm possible in higher areas. These showers will continue overnight and through Wednesday morning. Road surface temperatures are expected to remain below freezing throughout.
Driving conditions are expected to be difficult in places, so we would encourage local residents to consider if their journey is essential and take extra care on the roads.

As outlined above Operational Services have all their available operatives engaged on the Winter Service. We are extremely stretched during periods of severe weather such as this and are therefore hugely appreciative of any assistance provided by the general public. If you are willing and able to help out in your local community then the most effective way to do so it to shovel snow from public paths as quickly as possible whilst its fresh and loose. This prevents it from becoming compacted and turning to ice which in turn reduces demand on public grit bins. For obvious reasons do not use water to melt snow and ice.

Community Recycling Centres will be open today but a little later than normal.

We hope to have all sites open by 10AM with the exception of Linlithgow. We are working to get Linlithgow cleared and hope that it should be accessible, safely, by 11AM.

However, we'd hope that the majority of people will avoid travel today. Please consider whether a trip to the recycling centre is necessary or essential today.

Council subsidised Local Bus Service 31 (Bathgate - Livingston via Torphichen, Linlithgow, Springfield, Philpstoun, Bridgend, Ecclesmachan, St John's Hospital & Livingston Centre) operated by SD Travel has been temporarily suspended due to the weather conditions.
The situation will be monitored throughout the day, with a view to returning service as soon as possible.

Bin collections are likely to be delayed this week due to the severe weather conditions.

Our crews are all out working where it is safe to do so and will pick up as many bins as possible, but collections will take more time than normal.

Local residents are asked to leave their bins out until they are emptied, in a location where it is accessible from the road.

We will attempt to clear any missed bins when conditions improve, and will provide further updates on our progress later in the week.

More details in our FAQ below:

Q. Where can I collect grit?

A. Salt piles are available to residents on a self-help basis at the following strategic locations:

Q. Are you refilling grit bins?

A. Refilling grit bins is ongoing, but the current conditions means that many we have already replenished will be emptied once more. Extra resources are in place to refill bins so please bear with us as we work our way around West Lothian's large network of 2,500 bins.
If you are using a grit bin, please only take what you need. If you see any commercial businesses taking grit, please let us know. We are aware of several incidents where grit bins have been emptied almost immediately.

The grit from grit bins isn't for private use in your own garden or path. If you are using a grit bin, please only take what you need for the public path and public road outside your home. If you require grit for your own property, please purchase grit or salt from a retailer.

Q. How does gritting work?

A. Rock salt lowers the freezing point of moisture on the road surface, stopping ice from forming and causing existing ice or snow to melt. However for salt to work most effectively it requires other vehicles to crush it and spread it across the road. If it snows heavily then snow will still settle on treated surfaces particularly if traffic volumes are relatively low such as during the night or early morning. This explains why driving conditions can remain difficult even though a road has been ploughed and gritted in both directions.

Q. When I drive behind a gritter, they aren't always spreading grit/salt. Why is that?

A. Each gritter has an allocated route to ensure the network is treated as efficiently as possible. A gritter may be tasked with spreading salt on a route in Livingston therefore doesn't start spreading until it reaches that location. Another reason is that a gritter may have used all its salt and is heading back to the depot for a refill.

Q. If I see a gritter that is not moving, why is that?

A. Drivers need to have a break from driving - it's the law. If one of our gritters hasn't moved in a while, this could be the reason why. Alternatively the vehicle may have broken down and is awaiting recovery.

Q. Why do gritter vehicles spend so much time in and around Bathgate?

A. Our depot is in Bathgate so all gritters need to set off from Bathgate, return to re-fuel, load up with more grit and change drivers. Therefore they are in and out of Bathgate, a lot.

A. The council doesn't have the resources to treat all roads simultaneously therefore we need to prioritise. Housing estates are secondary level 2 routes treated on a reactive basis only during normal working hours. These routes will only be treated when the higher priority routes are deemed to be in a satisfactory condition.

Q. What about railway station car parks and other private car parks?

Thank you and stay safe everyone.

Back to February 2021
Environment & outdoors 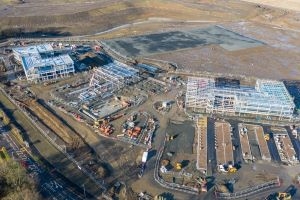 West Lothian Council is set to invest £290 million between now and 2027/28 on assets to support the delivery of essential services.

West Lothian Council is marking Fairtrade Fortnight from Monday 22 February to Friday 7 March to help ensure producers in the developing world getting a fair deal.

West Lothian residents are being encouraged to sign up online for this year's Fairtrade Fortnight.