West Lothian Council is calling on the Scottish Government to upgrade wastewater treatment in Almond Valley as quickly as possible following reports of sewage finding its way into the River Almond, prompting serious concerns for public health and the environment. 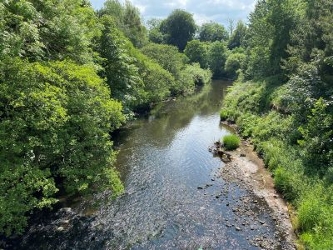 The call follows a detailed report on the wastewater treatment practices in the Almond valley, set out at the Council Executive today (Tuesday).

The report confirmed that the council has no statutory responsibility for the treatment or discharge of sewage from wastewater works or in coordinating the investment necessary to ensure continued capacity for new developments within the area. The council does not have powers in relation to the river quality or enforcement, or the protection of persons or animals who may come into contact with the river.

On several occasions the council has raised concerns on the wastewater discharges with SEPA, Scottish Water and Veolia (who oversee wastewater treatment works affecting the Almond) expressing anxiety and outlining the frustration of local people aware of, and disheartened by, untreated wastewater and sewage related debris being discharged into the River Almond.

Scottish Water has improvements planned to upgrade the East Calder Treatment Works by 2027 but details have still to be agreed.   The council is now calling for the Government to ensure that those plans are designed and implemented without delay.

There is a perceived increase in the volume of untreated urban wastewater - commonly known as sewage - being discharged from sewage overflows across areas of West Lothian and Edinburgh into the River Almond. Matters came to a head in April 2020 following a serious discharge from East Calder Wastewater Treatment works. Members of the community were extremely concerned by these events.

The report by the council's Operational Services Engineers explained that the discharge of untreated urban wastewater (sewage) from the network is an established, regulated and licensed practice during periods of exceptionally wet weather and deals with excess capacity within the sewage system and at sewage treatment works. Scottish Water is responsible for ensuring the design of wastewater treatment works satisfies licence conditions.

The council's report set out the recent work undertaken by the council and local groups in tackling some of the concerns within the local community.

Executive councillor for the Environment, Tom Conn said: "Protecting the local environment is one of the council's priorities and we share the concern that local groups and individuals have expressed about sewage being discharged into the Almond. We are all highly concerned about the adverse impact on the ecology and biodiversity of the River Almond corridor.  We are calling on the Scottish Government to ensure that the plans for the East Calder Wastewater Treatment are undertaken as quickly as possible and before the planned dates that are currently in place. It's vital that these works are undertaken as quickly as possible."

"We are taking this issue very seriously and this report by officers is to be welcomed as it sets out the wider context and provides a degree of transparency for local people, which is one of the main issues."

An officer working group - co-ordinated by Scottish Water and involving SEPA, Veolia and the council - has been established to improve communications with the local community and increase transparency and knowledge. A number of outcomes have been delivered. However, the council is calling for more to be done.  The Council and local elected members have also been invited to join a wider stakeholder group, which meets for the first time later this week.

"The council has sought to learn about the measures that SEPA, as regulator, are putting in place to drive long term investment by Scottish Water to reduce the incidence of spills of untreated sewage into the River Almond. It's also important for us to explore whether there may be scope for the organisations to work better to foster a greater spirit of openness and co-ordinate communications about the day to day impact of wastewater treatment on the river system. Scottish Water are responsible for and are leading on the co-ordination of communications around this issue.

"River Almond Action Group (RAAG) was established by a local activist and the group, along with a number of well attended community litter picking and river scavenge events linked to RAAG, are rightly gaining local support.

"The group aim to drive change and improve the river and should be applauded for their efforts to improve the local environment.

"The council welcome the efforts of RAAG and has established contact with them to assess how we can help further by seeking answers from those responsible on their behalf. There is also ongoing and regular dialogue and support around community led litter picks on parts of the river and river corridor in council ownership."