East Calder Partnership Centre has been renamed in honour of the late Councillor Dave King. 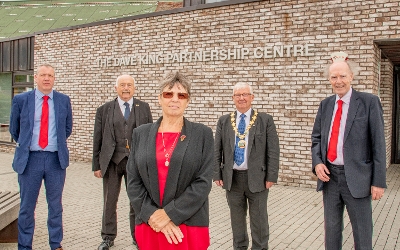 The decision to rename the centre the "The Dave King Partnership Centre" was unanimously approved by the Full Council recently.

He was elected Depute Provost of West Lothian Council in 2012. He was also Executive Councillor for Culture and Leisure and had an active role on numerous committees over his time as councillor.

Leader of West Lothian Council Lawrence Fitzpatrick said: "Dave was an incredible public servant for over three decades firstly on West Lothian District Council and then West Lothian Council as a councillor including more recently as Depute Provost. He was highly respected in his community and in particular his village of East Calder.  I'm sure I speak for many when I say it was a privilege to spend time with him and to have the opportunity to work alongside him over the years.

"East Calder was the centre of the universe for Dave and he done everything in his power to make sure everyone else treated it as such."

Provost Tom Kerr also paid tribute. He said: "I considered Dave a good friend and we worked closely in the Civic office. He was so proud to be Depute Provost of West Lothian and I know how much that role meant to him. His work ethic and commitment to the people within his community were legendary.

"I know how highly respected Dave was within the council and within his local community. His legacy will live on within East Calder and I'm delighted that the Partnership Centre in his own village has been named after him."