Livingston is to bid for city status as part of the Queen's 2022 Platinum Jubilee celebrations. 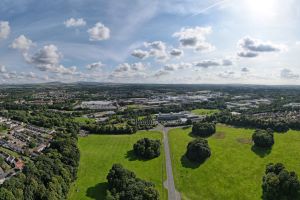 Council Executive agreed to enter the Platinum Jubilee Civic Honours competition and apply for West Lothian's largest town to be given City status on its 60th anniversary year.
The bid will be led by West Lothian Council working in partnership with local companies and community planning partners.
A short-term working group, including representatives from The Centre, Almond Valley Heritage Centre and Mitsubishi Electric, will be set up to complete the application before December 2021, showcasing the new town and demonstrating why Livingston deserves to become a city.
Leader of West Lothian Council Lawrence Fitzpatrick said: "I am delighted to that Livingston is set to apply for City status.
"Its journey from three small villages with just 60 households in 1962 to a successful regional centre in the last 60 years has been amazing, and to gain city status in the anniversary year would be something special.
"As a Livingston resident, I can testify that it is a vibrant community with a unique identity. We can be rightly proud of the town as the main hub for the developing area of West Lothian, in key areas such as economy and jobs, culture and leisure, retail, administration and residential.
"Livingston was always planned as a Garden City and I'm confident we can put a strong case forward to Her Majesty, The Queen, to showcase why this is the perfect time to achieve the dream of becoming a city."
The population of Livingston is now over 57,000 (making it significantly larger than current cities such as Stirling, Inverness and Perth) and is due to grow to 100,000 in future years.
Community participation and involvement, including input from local elected members, local schools and West Lothian's Lord-Lieutenant will help to showcase the many strengths of Livingston in support of the application process.
A community engagement plan will be developed to ensure that the application is fully encompassing of all those who live, work and have an interest in all things associated with Livingston.