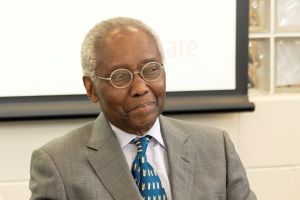 Organised by the council's Museums Service, "The Story of the Windrush Generation" saw Sir Geoff share his personal experiences of being part of the thousands of families who moved to Britain from Caribbean countries after the Second World War to help fill post-war labour shortages.
The online audience heard Sir Geoff's compelling account of his own move from Jamaica to join his mother in Britain at the age of 14, and how a chance doorstep encounter marked the beginning of his educational journey.
His fascinating talk also explored the ongoing discrimination and conditions endured by the Windrush people, and their fight for justice and compensation.
Sir Geoff Palmer OBE said: "I was delighted to take this opportunity to tell the story of Windrush to an engaged West Lothian audience.
"The response was very positive, and I would like to see more education on the history of Windrush to ensure our young people can learn lessons from it.
"I would like to see Windrush Day on 22 June marked in West Lothian and across Scotland, as it would play an important part in ensuring awareness remains high."
Councillor Cathy Muldoon, vice chair of the culture and leisure policy development and scrutiny panel, said: "Huge thanks to Sir Geoff for sharing his deeply personal experiences of being part of the Windrush Generation, and raising awareness of this key part of UK history.
"Sir Geoff is a fantastic orator and it is clear the attendees were genuinely moved by his life story, and the continuing plight of the Windrush generation."