The family of former councillor Lex Davidson have visited the library that has been renamed in his memory. 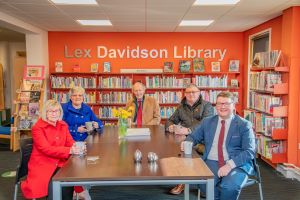 The council received a request to rename Broxburn Library in Strathbrock Partnership Centre in memory of the former local councillor, which was approved by Council Executive in February following consultation with the family and stakeholders.
Born and bred in Broxburn, Lex served his community as a councillor for 25 years before passing away in 2020 aged 72.
Leader of West Lothian Council Lawrence Fitzpatrick and Executive councillor for culture and leisure Andrew McGuire welcomed family members Ann Davidson, Tommy Davidson and Elspeth Dickison to an informal event to see the new library name in place, over some light refreshments.
Leader of West Lothian Council Lawrence Fitzpatrick said: "It was great pleasure to meet with Ann, Tommy and Elspeth and let them see the new Lex Davidson Library first-hand.
"Lex was very proud to represent his local community, who he cared deeply about, so renaming the library in his memory is a fitting tribute."
Executive councillor for culture and leisure Andrew McGuire added: "Lex Davidson was well-known as both a hard-working councillor and a devoted family man.
"We hope he would have been delighted to see his name on the library, which is an important facility at the heart of the local community."