West Lothian Council is joining organisations across the country in flying the flag for a week ahead of Armed Forces Day. 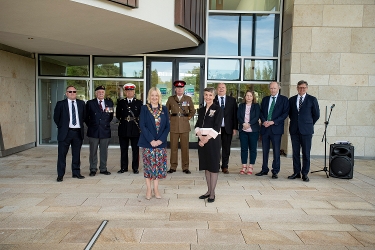 The Armed Forces Day flag was raised at West Lothian Civic Centre at 10am on Monday 20 June, and will remain in place until Monday 27 June in honour of our country's armed forces.

Cadet Colour Sergeant Morgan Henig had the honour of raising the flag, with music from members of West Lothian Schools Pipe Band.

Provost Muldoon said: I would like to thank everyone who contributed to the flag raising ceremony.  Flying the Armed Forces Day Flag is a way to show our support for the men and women and their families who make up the Armed Forces. This week of recognition provides us an ideal opportunity to thank them for their commitment and bravery in the past, present and in the years to come."