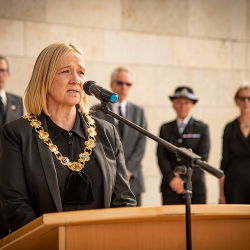 Lord-Lieutenant for West Lothian, Ms Moira Niven MBE invited those in attendance to participate in a two-minute silence which was followed by a reading of the Proclamation of the Accession by West Lothian Council's Chief Executive, Graham Hope.

Whitburn Brass Band were in attendance and played the National Anthem 'God Save the King' following the reading of the Proclamation of the Accession.

Prior to the ceremony starting, Provost Cathy Muldoon was joined by the Lord-Lieutenant, Leader of West Lothian Council, Councillor Lawrence Fitzpatrick, and the council's Chief Executive in signing the book of condolence inside West Lothian Civic Centre.

Wreathes were laid at the War Memorial outside the Civic Centre where they joined the numerous floral tributes left by West Lothian residents in memory of Her Majesty Queen Elizabeth II.

West Lothian Provost Cathy Muldoon said: "I would like to thank everyone who attended and took part in this special Proclamation Ceremony.

"It provided an opportunity for West Lothian to come together to remember the service of Her Majesty Queen Elizabeth II while also welcoming the accession of His Majesty King Charles III.

Local residents can also share their memories and tributes to Her Majesty Queen Elizabeth II via an online book of condolence at Book of Condolence - https://www.westlothian.gov.uk/condolence