Two councillors have been appointed to senior roles by West Lothian Council. 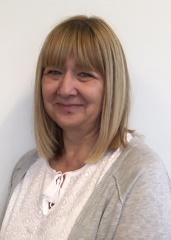 Current Executive councillor for development and transport and Breich Valley ward Councillor Cathy Muldoon's new responsibilities will include chairing the full council meeting when Provost Tom Kerr is unavailable, as well as represent the council at civic and ceremonial events when required.

Armadale and Blackridge ward Councillor Andrew McGuire will now chair the council's Culture and Leisure policy development and scrutiny panel, with responsibility for areas such as sport, arts and libraries.

Both roles were previously occupied by long-standing councillor Dave King, who sadly passed away earlier this year. 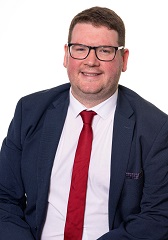 Back to October 2021
Armadale and Blackridge

A consultation on the future priorities of local services has been launched in West Lothian.

Approval has been given for 12 new or upgraded pedestrian crossings across West Lothian. 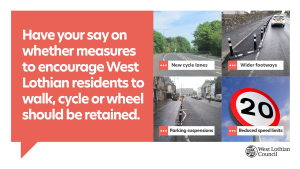 Have your say on keeping temporary Spaces for People measures

West Lothian residents are being asked to share their views on whether temporary measures such as reduced 20mph and 40mph speed limits and new cycle lanes should be kept.